With Microinvest, Proparco is supporting Moldova’s economic fabric hard hit by the war in Ukraine

With a €8 million loan allocated to the microfinance institution Microinvest via its subsidiary Proparco, AFD Group is supporting Moldova’s private sector which is facing major challenges due to the economic repercussions of the conflict in Ukraine. This partnership was signed in late May during the first visit to Moldova by Rémy Rioux, AFD’s CEO, and is Proparco’s first operation in this Eastern European country.

What are the major economic challenges in Moldova and why is AFD Group – via its subsidiary Proparco – supporting Microinvest ?

Stéphane Froissardey: In February 2021, during the first official visit to Paris by the Moldovan President Maia Sandu, Emmanuel Macron stressed France’s commitment to assist this Eastern European republic with its structural reforms towards a more effective market economy for entrepreneurs and the population. The French President also reiterated the need to fight uncompromisingly against corruption which has long plagued this country with less than 3 million inhabitants. This first operation in Moldova by Proparco – and more generally AFD Group – to directly support the private sector fits in with this highly strategic context, which has taken on particular importance with the recent announcement of Moldova’s candidature for accession to the European Union.

The microfinance institution (MFI) Microinvest finances players in Moldova’s economic fabric in a responsible manner and AFD Group therefore saw it as the right partner for a first operation in the country. This operation is also linked, in a very complementary way, to France’s recent budget support to Moldova and AFD’s operations currently under discussion in the transport and energy sectors.

In what way does this operation demonstrate AFD Group’s commitment to protect the private sector from the economic impacts of the war in Ukraine?

Stéphane Froissardey: Moldova’s economy has been hard hit over the past three years: since 2019 by the crisis caused by the Covid-19 epidemic, in 2020 by a prolonged drought which severely affected the primary sector (the sector accounts for almost 15% of Moldova’s GDP and employs 27% of the population) and currently by the war in Ukraine, the repercussions of which are yet to be assessed but they could be very adverse for Moldova’s economy. This first operation by Proparco in Moldova, in a context of great macroeconomic and geopolitical uncertainty, is a concrete step to support the local economic fabric via a microfinance institution that is a leader in its market and the largest provider of loans to Moldovan farmers.

How does Microinvest stand out from other microfinance institutions?

Estelle Schuppert: Microinvest is the sixth largest institution in Moldova’s financial sector and responsible financial inclusion is central to its strategy. This MFI was originally set up by the Soros Foundation and has developed giving priority to the agriculture sector. It is also the only Moldovan financial institution to have obtained Smart Campaign certification, demonstrating its commitment to the principles of client protection and their integration in its procedures and practices. Microinvest’s objective is to develop its digital services in the coming years in order to facilitate access to its products for its clients.

Who does Microinvest target in particular?

Estelle Schuppert: Through its lending activity, Microinvest gives microentrepreneurs and farmers access to appropriate financing, through good communication with the clients, a flexible range of products and a physical presence nationwide. Its social ambition can be seen from the targeting of its clients: two-thirds of its clients live in rural areas and a third of the loans allocated are for agriculture.

How will this financing by Proparco strengthen Microinvest’s action?

Estelle Schuppert: This operation reflects Proparco’s wish to establish a partnership with one of the top players in Moldova’s financial sector. Through this financing, Microinvest should be able to finance over 1,800 micro-credits and facilitate new investment opportunities for Moldovan microentrepreneurs and private individuals. Proparco’s loan should support some 3,600 jobs (direct and indirect) over the next 5 years.

What impact will this operation with Microinvest have on the economy and social development?

Stéphane Froissardey: Beyond the symbol of the operation and the strong signal sent to the business community and Moldovan authorities, this operation will indirectly support Moldovan farmers, microentrepreneurs and MSMEs. We estimate that this financing will help create and finance 130 companies. In addition to these tangible effects, the catalytic effect of this operation, which is sending a clear message of France’s support to Moldova’s economy, should not be underestimated. The participation at the signing ceremony for this first loan agreement of H.E. Graham Paul, Ambassador of France to Moldova, Mr. Rémy Rioux, Chief Executive Officer of AFD, Mrs. Cécile Couprie, AFD’s Regional Director for Eurasia, and Senator Joëlle Garriaud-Maylam, clearly illustrates the importance of this operation. 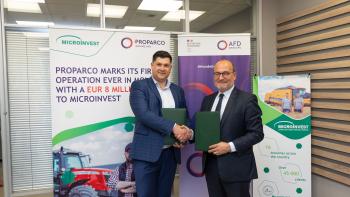 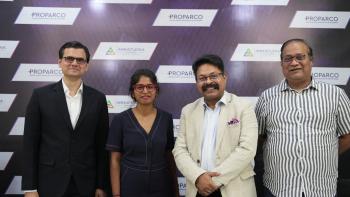