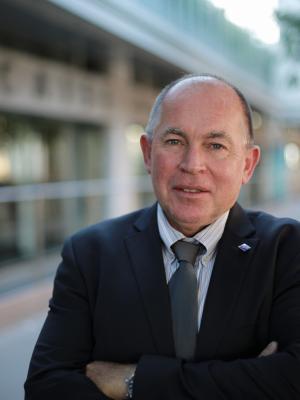 Philippe Bauduin was recruited at the Caisse Centrale de Coopération Economique in 1983, and was assigned as an officer to the Papeete agency. In 1987, he joined the French Guiana Development Finance Company (SOFIDEG), a subsidiary of the Caisse Centrale, as Head of the Corporate and Housing Credit Department.
He continued his career path with two assignments in Africa. He was first advisor to the Chief Executive Officer of the National Bank of Economic Development of Burundi in Bujumbura, from 1992 to 1995. He subsequently served as Secretary General of the Guarantee Fund for Private Investment in West Africa (GARI), at the West African Development Bank (BOAD) in Lomé, from 1995 to 1998. He set up and organized this fund to support credit institutions in the 18 member countries of the Economic Community of Western African States (ECOWAS).
Philippe Bauduin returned to the headquarters of the Caisse in 1998 to take over as Director of the Banking Division in the Overseas France Department. In September 2002, he was appointed Deputy Chief Executive Officer at the Caledonian Investment Bank (BCI), in Nouméa, which at the time was a subsidiary of AFD. In the context of his duties, he was seconded to BRED in 2006 for 3 years. In 2009, he was appointed AFD Director for Pointe-à-Pitre.
In 2013, following a 6-month secondment to the Guadeloupe Social Housing Company (SIG) to act as Chief Executive Officer, Philippe Bauduin was appointed AFD’s Financial Director.

The Risk and audit committee