Winds of hope in Pakistan

©Oriane ZERAH
Renewable energies and energy efficiency
AsiaPakistan
Report
Pakistan:
Winds of hope
2.5%
of Pakistan's electric power out put
Over 500
jobs created during the construction phase and so permanent jobs
60,000 tonnes of CO2 equivalent per year
a reduction of the country's carbon footprint by C.
PROPARCO IS INVESTING $20M IN A PAKISTANI WIND FARM, CONFIRMING ITS SUPPORT FOR THE SHIFT TO RENEWABLE ENERGY SOURCES.

Pakistan suffers from an estimated annual energy shortfall of roughly 5,200 MW. To tackle this pressing problem, Gul Ahmed Energy Group has developed a wind power  project in partnership with Proparco.  In October 2016, a first facility comprising 20 wind turbines producing 2.5 MW each, and thus a total of 50 MW, was commissioned in the Jhimpir corridor located in southerly Sindh, Pakistan’s second most populous province. Ubaid Amanullah, the Executive Director of Gul Ahmed Energy, argues that wind farms deliver both environmental benefits, in that they entail lower greenhouse gas emissions and a smaller carbon footprint, and economic benefits by reducing the country’s reliance on costly imported fossil fuels.

And while he believes it is too soon to assess the ultimate impact of these new forms of energy on the population, he considers even these modest initial steps to be encouraging. “The first wind farm was commissioned in 2013, and most of the others weren’t built until 2015 or 2016,” he says. “Wind power isn’t a substitute at this stage; it’s merely a secondary energy source. The Sindh wind farm has nameplate capacity of 50 MW, and if you add that to the power generated by other wind farms, you get a total of 600 MW. That still represents only 10% of Pakistan’s current energy needs, but what makes this project significant is that it marks the beginning of a new form of energy production that is essential for Pakistan.  The country is starting to realize how important the shift to renewable energy is. This project is a first step in the right direction. Now we need to go further.”

This project is a first step in the right direction. Now we need to go further. 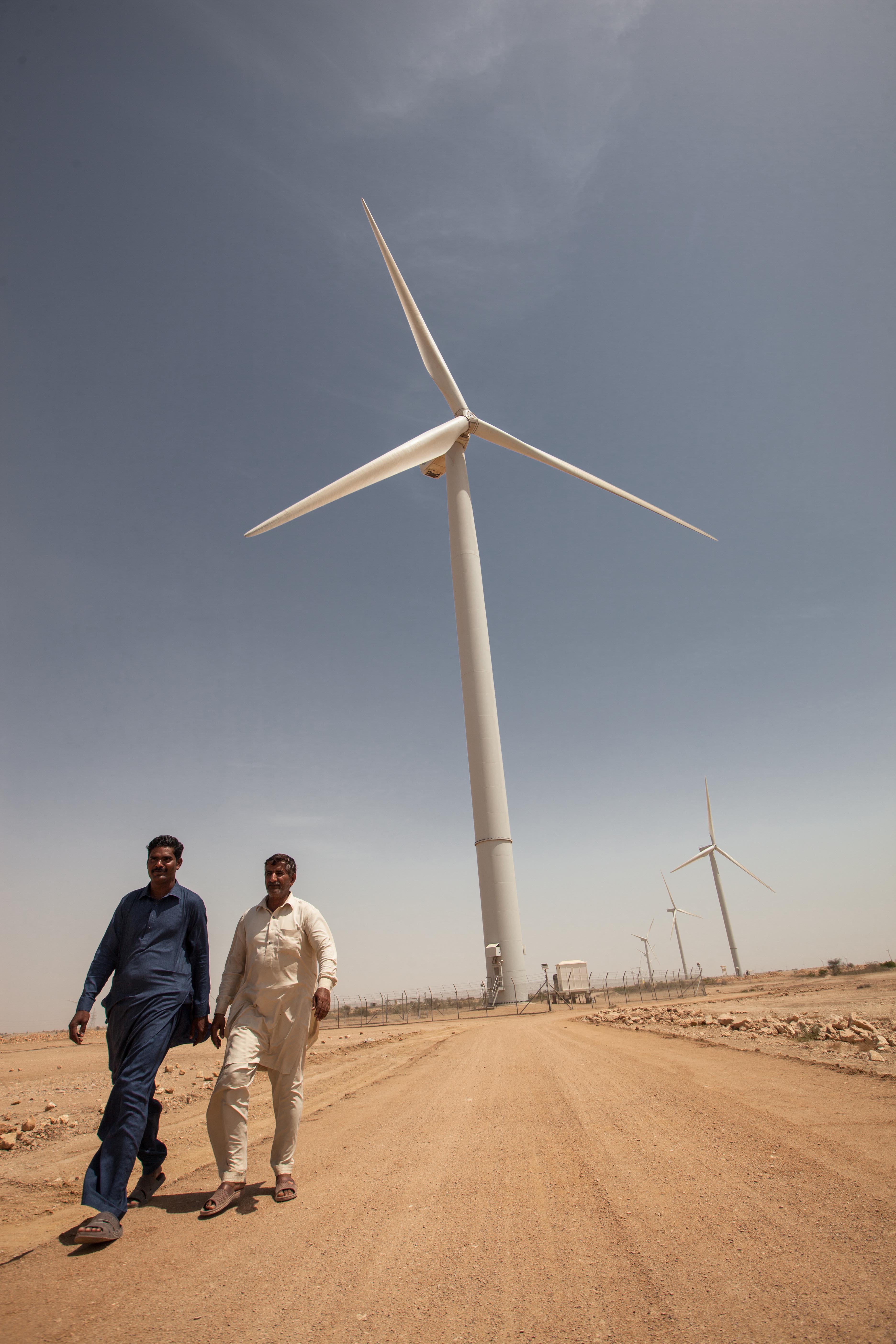 Previous Pause Next
1 of 3

©Oriane ZERAH
€20 million and some guidelines
Proparco has invested €20m in this project as part of AFD’s ‘Green growth and solidarity’ initiative, reflecting its commitment to developing renewable energy sources and combating climate change. “Without the contribution of Proparco, one of the key investors, this wind power project never would have got off the ground,” Amanullah states with conviction. “Our country really needs projects like this one.”

But aside from the financial support – a loan of around $19m for a project with a total cost of $126m – Proparco also encouraged the recruitment of local labour. The construction phase created jobs for construction workers and security agents, and since the wind farm has been up and running, all of the security staff and wind turbine operatives have been recruited from among the inhabitants of Jhimpir.

©Oriane ZERAH
TARGET: COVER 10% OF PAKISTAN’S ENERGY REQUIREMENTS
Thirteen wind farms are currently operating in Pakistan and nine others are in the pipeline. Over the coming years, many wind farms are also scheduled to be built, particularly at sites in Jhimpir and Gharo, both in Sindh Province in southern Pakistan. All of these projects are part of the Proparco/AFD “Green growth and solidarity” programme launched in 2015 to support responsible initiatives that help to effectively combat climate change.

©Oriane ZERAH
ZEHRA ZAHEER, ENGINEER AND PIONEER
Zehra Zaheer has always been passionate about electronic engineering. A native of Karachi, Zehra attended the NED University of Engineering and Technology in the capital. She was hired by Gul Ahmed Wind Power Limited (GAWPL) about a year ago as part of the team of engineers working on the Jhimpir corridor wind farm, about 100 km east of Karachi in Pakistan’s southerly Sindh Province.

“Most of my female classmates went on to study but once they finished university, they got married, had kids, and that was it! They are very highly qualified but they don’t work because their families are against the idea. Where I come from, women would never be asked to support the household: that is the man’s role. So when a woman decides to work, she always gets asked why. I completed four years of engineering studies – I want to put what I learned into practice and to experiment and test my skills.”

Twenty-three-year-old Zehra Zaheer is the first electronic engineer to be hired by GAWPL. Although she was wooed by a number of companies right after she graduated, she had no hesitation in choosing to work for the Group. “They selected the ten best graduates from my year – five men and five women – and asked us to do a test and an interview. I got chosen. Selecting a woman was no ordinary choice: it was important for Gul Ahmed to have a woman on their team of engineers. It’s a way for them to tackle gender inequality in this profession. In the legal department, the staff are all women but in the engineering department, for the moment, there’s just me!”

Zehra works at the head office, but she is in daily contact with the staff out in the field. She sometimes goes on-site for training or for meetings. Zehra is responsible for analysing data from the wind farm, as well as for writing reports and resolving technical problems, but she also has a say in decisions concerning future projects. “My boss supports me and sees to it that I am comfortable in my work environment. I would not have been able to work for them if I had had to stay on-site at Jhimpir, which is over two and a half hours from Karachi by car (around 130 km). In our society, it is not acceptable for a woman on her own to live alongside a group composed solely of men. But I really hope that I can serve as an example and that other women will join the team.”

The young engineer intends to resume her studies in a few years and to specialize so that she can become a technical manager. But for now, Zehra Zaheer is proud to be working on the wind farm programme because she believes that “renewable energy is the future of Pakistan”.