Sébastien Rieussec
Education
AfricaMali
Bamako
THE FUTURE ON A SILVER PLATTER
THE CHIAKA SIDIBÉ HOTEL SCHOOL
over
40 trainees
a year
11 months
of training
€16,4 m
loaned by Proparco to renovate and expand the Salam Hotel
CHIAKA SIDIBÉ, MALI’S FIRST WORK-STUDY HOTEL SCHOOL, BEGAN OPERATING IN BAMAKO IN 2015 WITH THE AIM OF EXPANDING HOSPITALITY TRAINING OPPORTUNITIES IN THE COUNTRY.

The school grew out of the encounter between Mossadeck Bally, the visionary CEO of the Azalaï Hotel Group and Proparco and its partners. All of them are betting on Mali'syouth and future.

In a few years, we hope to replicate our business model elsewhere in Africa.

This is a project we’ve been deeply attached to for ten years, one that took several tries.

They know that they’re here to learn a trade, that this is the key to escaping unemployment. 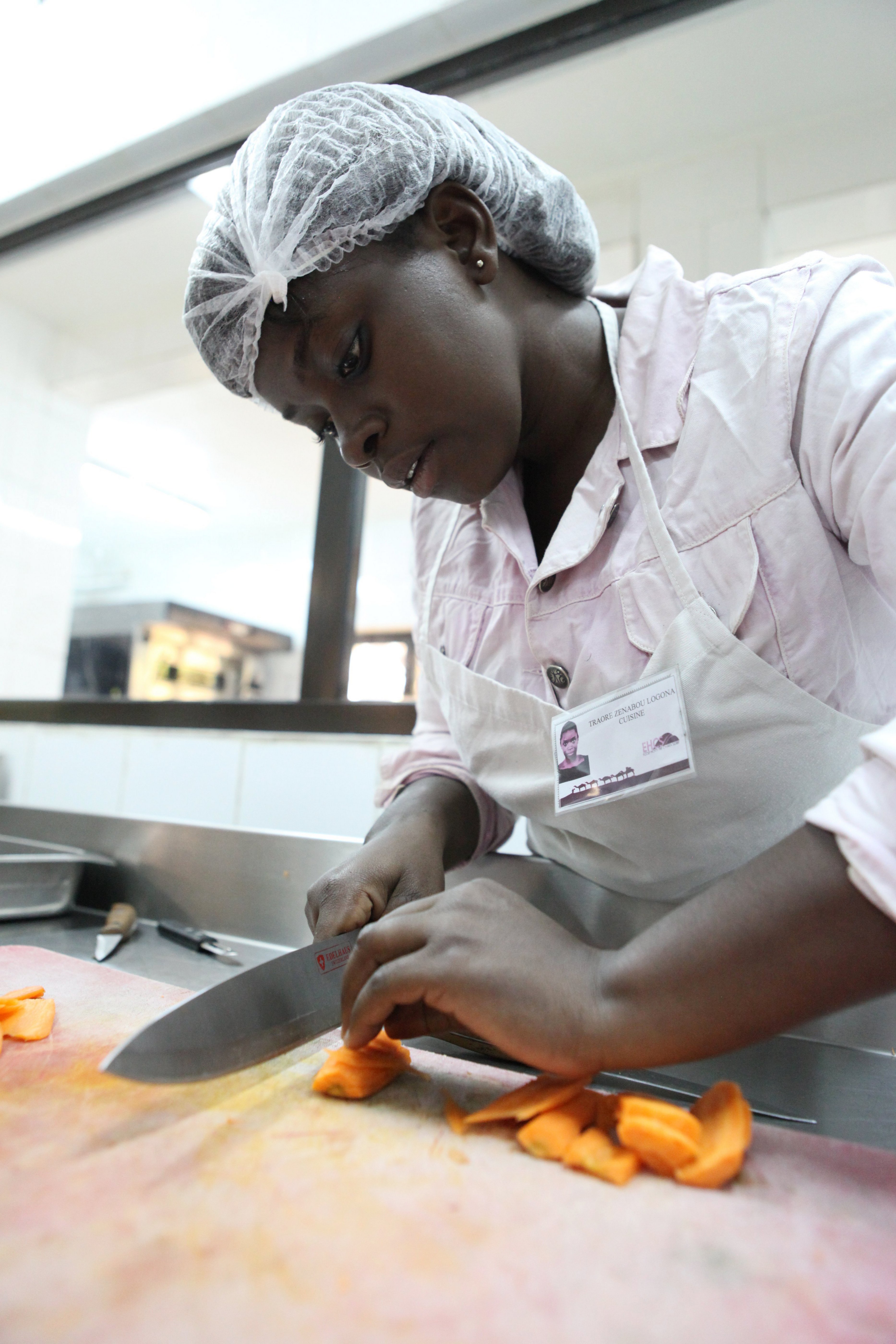 Previous Pause Next
1 of 7

©Ibrahim Diarrassouba
Working to avoid disaster
Today more than ever, young people in Mali need economic opportunities and solutions that address their aspirations. Even those with diplomas may find themselves unemployed, given that many university curricula are ill-suited to labour-market demand and the status of apprenticeship programmes is very much up in the air. Moreover, the 10.3% official unemployment rate only partially reflects the dramatic conditions affecting a country where, according to a UN Population Division estimate, at least 50% of people in the 15-to-39 age cohort are unemployed or underemployed.

Mossadeck Bally discusses the challenge in no uncertain terms, saying, “We consider reinvestment in training for youth as part of our corporate social responsibility. We have to give a chance to young people who might otherwise gravitate towards terrorist groups or set out on a highrisk journey across the desert and the Mediterranean.”

©Sébastien Rieussec
Gratifying for everyone
Female students are now in the majority, an outcome of the school’s commitment to gender equality and the sign that a modest but real cultural revolution is unfolding. Not only has empowering women become a key issue in Mali, but women are under-represented in the country’s hotels and restaurants, both in management and non-management positions. For them even more than for their male counterparts, training thus takes on crucial importance. Cooperative education at EHCS enables young women to increase their knowledge, skills and professional aptitude. In addition, young men and women working together fosters dynamic collaboration and encourages parity that will benefit both.

Better still, Chiaka Sidibé now has its own fan base. The restaurant used for on-the-job training has become a popular venue where Bamako’s gourmets get a chance to taste dishes prepared by the students and the renowned bread baked at the school all for just 10,000 West African CFA francs (roughly €15). In this way, the restaurant can advertise the quality of its cuisine while covering its costs. Furthermore, enthusiasm for the school extends well beyond local food lovers. A growing number of employers are eager to hire EHCS students even before they have completed the programme. “In light of how successful the first year was and how much positive feedback we have received from partner businesses, we have increased the size of the class of 2017. We also plan to offer additional courses in 2018 and recruit enough staff to be able to accommodate a hundred students a year. So we are training more young people and stepping up our work with African companies and other partners,” says Mossadeck Bally.

Convinced that there is plenty of opportunity and a genuine will among hospitality providers to enhance their industry, Bally wants to get his approach more widely adopted in the region. EHCS is therefore seeking further investors to give that approach the staying power it needs and make the school “an autonomous, solid, recognized structure throughout West Africa”, explains Aminata Soumah, the head of Human Resources. The aim is to broaden the choice of courses and build new classrooms to provide training across the spectrum of hospitality industry work, from the reception desk to room service and ultimately on to management positions. Ms Soumah would also like to see the certifications of EHCS graduates recognized as State diplomas. “In a few years, we hope to replicate our business model elsewhere in Africa and start up initiatives similar to Chiaka Sidibé,” she adds. That may sound ambitious, but such a plan responds to actual needs. Observers claim that the number of unfilled job vacancies at restaurants in sub-Saharan Africa increases every year.

©Sébastien Rieussec
Economy and tourism in Mali
Mali is a vast, landlocked country in West Africa extending from the Tropic of Capricorn to the Equator, with a population of 17.6 million – and expanding at an annual rate of 3.6%. Several years of economic expansion gave way to a political and security crisis triggered by the 2012 coup d’état and the occupation of the north of the country by Tuareg rebels and Islamist groups. International military intervention came in response. Those dramatic events have taken their toll on Mali’s largely undiversified economy, where cotton remains king.

Although tourism grew in the first decade of the new century, it has since collapsed. Mali is a fragile state indeed, ranked 179th out of 188 countries on the UN’s Human Development Index. And yet the resumption of foreign aid in 2013, measures planned by the government, the mobilization of part of the business community and initiatives to bring about a return to normal provide grounds for the hope that the country will soon be back on the path to growth – and that further projects like Chiaka Sibidé will take shape.

While the Land of the Dogons and Timbuktu are still off limits for now, business travel has picked up in Bamako. The World Tourism Organization (UNWTO) reported 168,000 visitors in 2014, a figure that reflects government efforts to create an investment-friendly environment.

©Sébastien Rieussec
Five months to open the school
The Chiaka Sidibé Hotel School (EHCS) thus emerged against a background of political instability tempered by hopes for economic recovery and inclusive development. “This is a project we’ve been deeply attached to for ten years, one that took several tries,” explains Aminata Soumah, the Azalaï HR Manager and project coordinator. With French-speaking West Africa forecast to grow faster than any other region of Africa for the third year straight, and with the hospitality and tourism sector working to establish higher standards, EHCS’s time has come, she says.

“The school grew out of the need to close a gap,” adds Mossadeck Bally, the CEO of Azalaï Hotels. “We realized we couldn’t find young people who already had basic hotel training, so we decided to tackle the problem on our own, found a school and train young people ourselves.” As it happens, what set the wheels in motion was an encounter with Bernard Creff, a native of Brittany and former Accor Hotels executive. Restless, always game for new challenges, known for his pioneering work in Cambodia, where he started a hospitality industry vocational school in Siem Reap that currently has over 40 trainees a year, he started the project in Mali at the beginning of 2015. Creff moved swiftly to bring in Nicolas Huet, a former Campus France executive, to run the programme. Named for a trusted colleague of Bally’s who died in 2010, Chiaka Sidibé opened in September 2015 on the premises of the Azalaï Dunia Hotel. “Once Mossadeck Bally got me involved in this great project, it barely took us five months to set up the Bamako school,” recalls Creff.

Sébastien Rieussec
Proparco back after 15 years’ absence
But that wasn’t the end of the story for the head of Azalaï. Returning to Mali after 15 years’ absence, Proparco reached out to the hotel group as part of its focus on fragile states in Sub-Saharan Africa and its policy of supporting the private sector. Convinced that a thriving hospitality industry would be crucial to luring investors back to Mali, the institution’s leadership granted a €16.4m loan to renovate and expand the Salam Hotel, Azalaï’s pride and joy in Bamako. The loan was accompanied by a three-year technical assistance programme to consolidate the school’s business model and help put the curriculum in place.

©Sébastien Rieussec
Cooperative education – an approach previously unknown in Mali
The cooperative education model offered at EHCS, with students spending half their time in class and the other half on the job, is a novelty in Mali. Existing training programmes tend to be confined to the classroom, particularly in the hospitality industry. But while the new hotel school has made hands-on experience a priority, it also gives students courses in French, English, computer science and other subjects that contribute to a broadbased education.

To be admitted, applicants must pass a written test comparable to the one taken by French pupils at the end of middle school and go in for an individual interview. Annual tuition is 250,000 West African CFA francs (equal to roughly €380). Virtually from the outset, trainees get down to work, handling dishes, wielding carving knives and the like. They soon move on to the adjoining Grand Hotel for a first real taste of work in a dining room and, barely two months later, they start in on internships at hotels and restaurants in Bamako.

Daniel Hougnon, the owner of the Badala Hotel whose stunning restaurant overlooks the Niger River, immediately agreed to partner with EHCS. This former figure at Accor with fifty years of hotel experience – primarily in Africa – has taken on five interns. He has even hired one of them from last year’s graduating class. Initially a waiter, Luc Kassogué gets kitchen training on his days off and dreams of opening a hotel of his own.

©Sébastien Rieussec
The right attitude
An extremely demanding employer, Mr Hougnon appreciates how little time it takes his young recruits to be operational, and that they show “real passion for their work and the right attitude”. Stressing that he is constantly in need of skilled staff, he asserts that he is prepared to hire interns. The Azalaï Hotel Group likewise plans to hire 30% of the students in each graduating class. For the class of 2016–2017, the school has partnered with an NGO, SOS Villages Mali, to provide training to 25 young people from the countryside. Meanwhile, the Server and Line Cook programme has been expanded to include baking and pastry-making, a skill in great demand in Bamako, with the result that the group has been increased from 40 to 60 students.

“We have eleven months to turn them into professional staff,” comments director Nicolas Huet. Graduates leave the programme with recognized vocational competence and maximum employability. “Everyone from the first year who wanted to work found a job,” he adds. Thomas Brissiaud, an international service volunteer who teaches culinary arts at the school, fully agrees. Impressed with how motivated his students are, the young chef says, “They do their utmost. They know that they’re here to learn a trade, that this is the key to escaping unemployment.”
Report on Mali's first hotel school

Special report from Bamako on Mali's first hotel school : Chiaka Sidibé. A projet run by Azalaï Hotels Group, with the support of Proparco